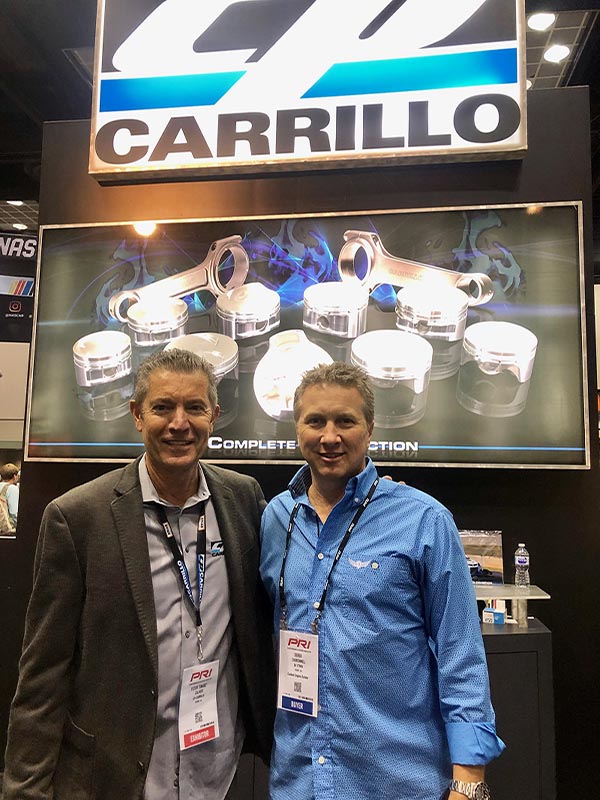 "Derek and I began designing pistons together in 1999 for NHRA Pro Stock Motorcycles. He has built many NHRA winning engines using our CP Pistons.
Not only does he build race winning engines, he has a vast knowledge of the parts that make up those engines. He's the guy for any custom motorcycle engine build." 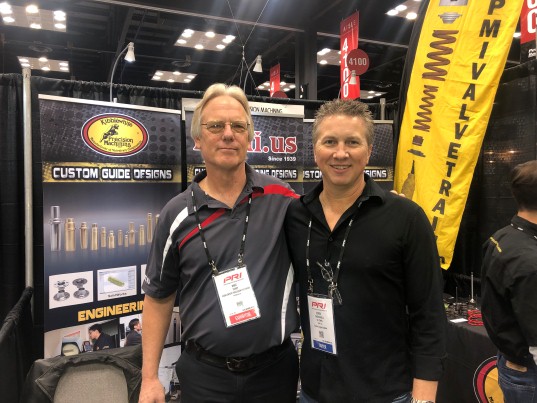 “All of the serious engine builders are at PRI, and one of the best is Derek Churchwell from DC V-TWIN.
It’s always great to see Derek. He and KPMI have a relationship that spans over two decades.
During that span of time, Derek has been intimately involved in more professional motorcycle drag racing championships than most folks will see in a lifetime.
He’s a knowledgeable, trusted, business partner, his feedback is invaluable, and he’s pleasure to work with”. 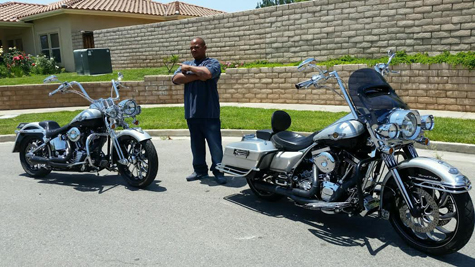 “Everything I own is fast - from my cars to my boats. I met Derek five years ago when I wanted to make my Harley the fastest on the streets. He exceeded my expectations for my bike by a mile. He made it so fast I was able to beat everyone from coast to coast that would race me. Since then we have built several more fast Harley’s too. I trust him and only him when it comes to making my bikes fast and you should too!” The Sammy Bonner – “The Fastest Man In The World" 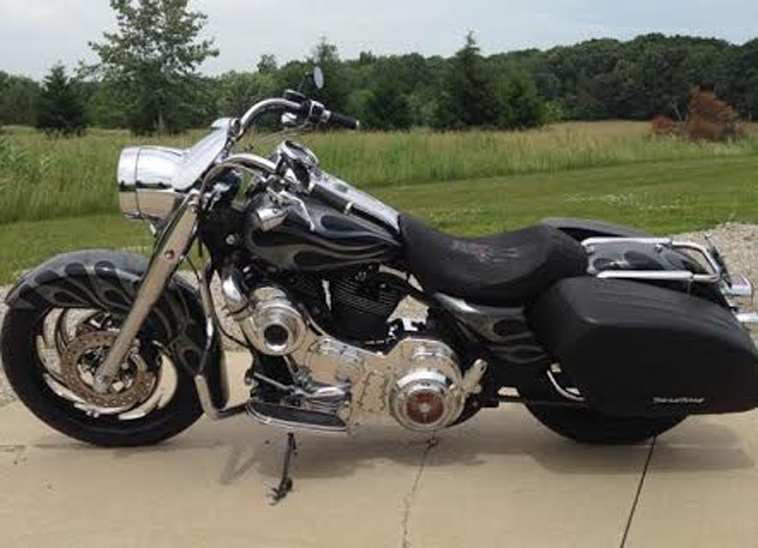 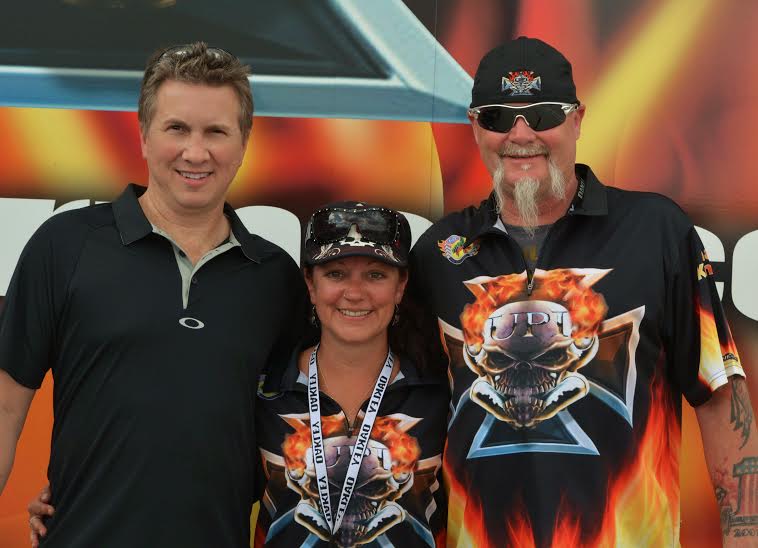 “I would like to thank Derek for all he has done and designed for me and my company. SO happy with all his work and insight when it comes to V-Twin motors! His knowledge and advice is second to none and will always be appreciated as we continue to work together and this collaboration will continue for years to come! UPI PERFORMANCE AND I THANK YOU!” Scott & JoAnne Smalley – Owners of UPI Performance and the UPI Performance NHRA Pro Stock Motorcycle 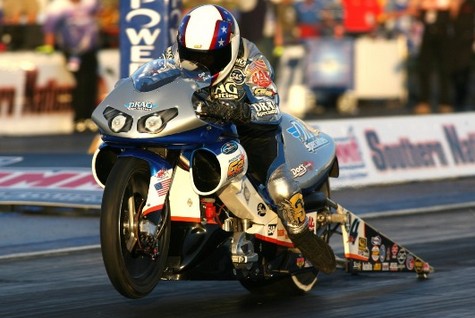 "Derek has built some of the best engines that I have ever raced, including the one we went 6.91 in Sonoma in 2006. He builds reliable horsepower that last!" Chip Ellis - NHRA Pro Stock Motorcycle Rider 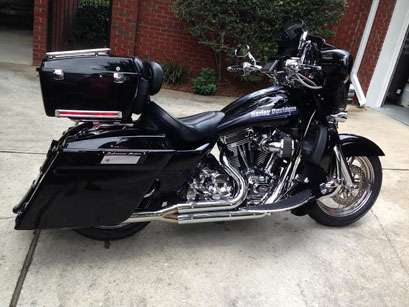 Hello Derek,
"Just wanted to thank you again for all of your efforts to design and build the perfect 126” touring engine for my bike. With 160 HP and 157 FT pounds of torque I can now ride the Rocky Mountains without continuously shifting gears. The engine will run all day on the back roads and never climb over 180 degrees: at 80 to 90 on the interstate it will ease up to 225 on warm days, unbelievable and that is with no oil cooler. Fuel mileage is the same as my friends stock bike when riding under normal conditions. Other touring it will definitely blow the back tire off at the red light. The old bagger is a real sleeper and lots of fun looking at all the long faces when they pull up at the next red light. I just love it…..”Any Way you Won’t It” Keep up the good work my friend." Terry Holsonback - Mobile, Alabama 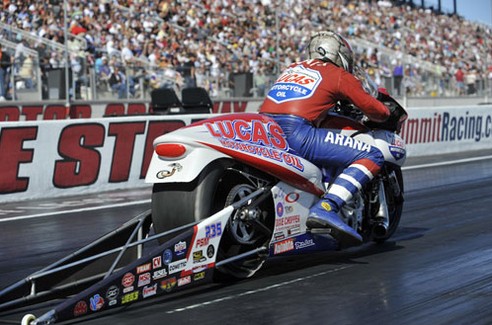 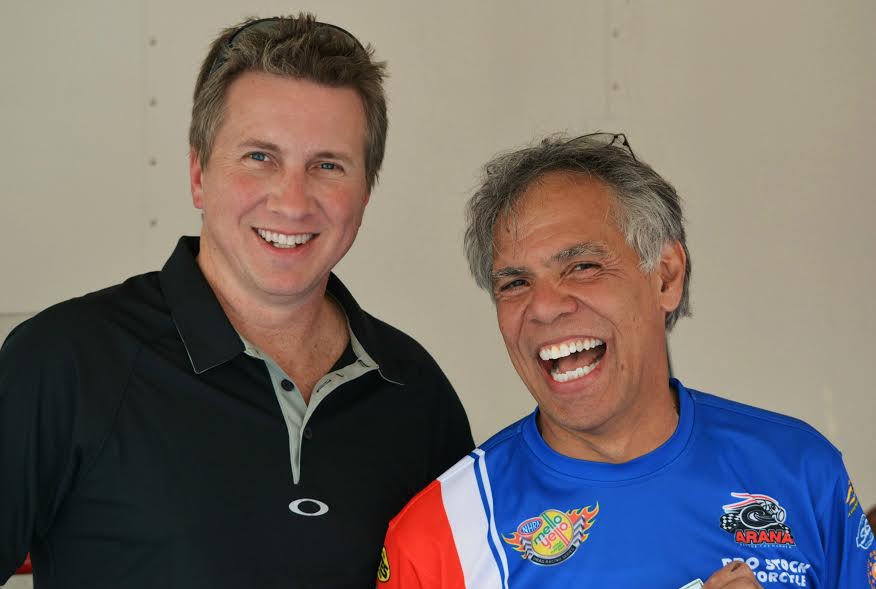 "I have known Derek for 20 years during my racing career. When I switched to the S&S V-Twin, he was instrumental in helping me make the transition with great technical advice. He’s a knowledgeable friend I can trust in the business." Hector Arana - 2009 NHRA Pro Stock Motorcycle Champion 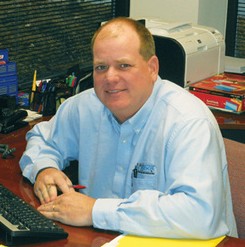 "I have worked with Derek since 2010 when the magazine reached out to him for technical articles on V-Twin motorcycle engines. He has a strong background in performance engines and is able to translate his knowledge through his editorials. He’s the go to guy for Harley engines." Steve Fox – AERA Operations Manager (Engine Professional Magazine) 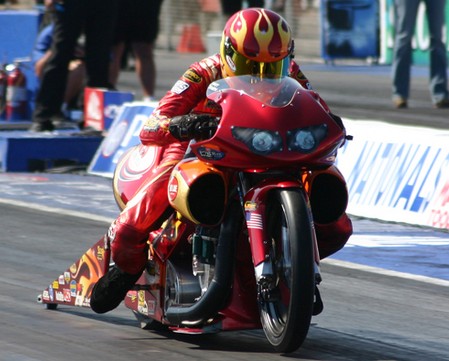 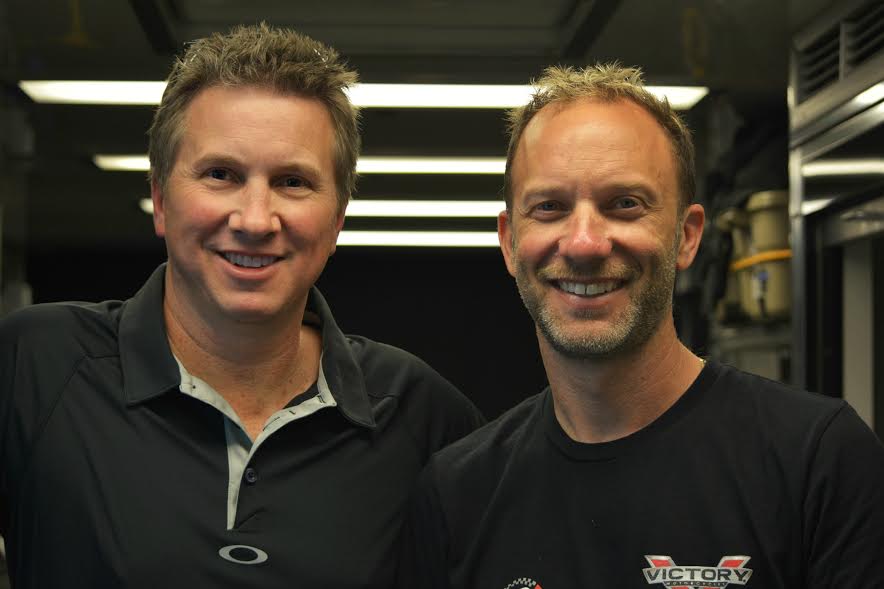 "Derek and I have been friends since the mid 90’s. He’s a great guy for technical information on motorcycle engines. He was also instrumental in helping me win my first NHRA Championship in 2007." Matt Smith – 2007 & 2013 NHRA Pro Stock Motorcycle Champion

"I have known Derek since 2010, and he has helped me with everything, from parts to complete engines.Whether it’s been for street bikes or for my Pro Stock Bike racing program, he always provides top quality and service." JESPER THIEL - 2011 UEM PRO STOCK BIKE CHAMPION & OWNER OF JT MOTORSPORT DENMARK. 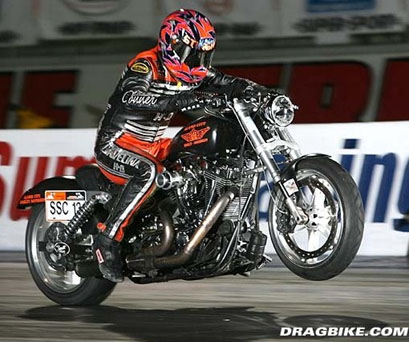 “I’ve known Derek for over 10 years now and can’t say enough about his professionalism and passion for motorcycles. Since the early 2000’s Derek has been extremely involved in building awesome race motors for me as well as great street motors for some of my V-Twin customers. There hasn’t been a time when he didn’t make himself available for a few minute technical phone call an that goes a long way in this industry.” MICHAEL RAY - NHRA PRO STOCK BIKE RIDER & MULTI TIME AHDRA CHAMPION 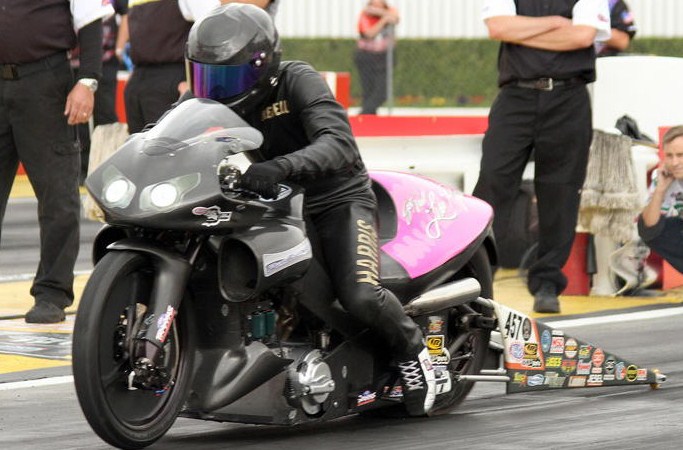 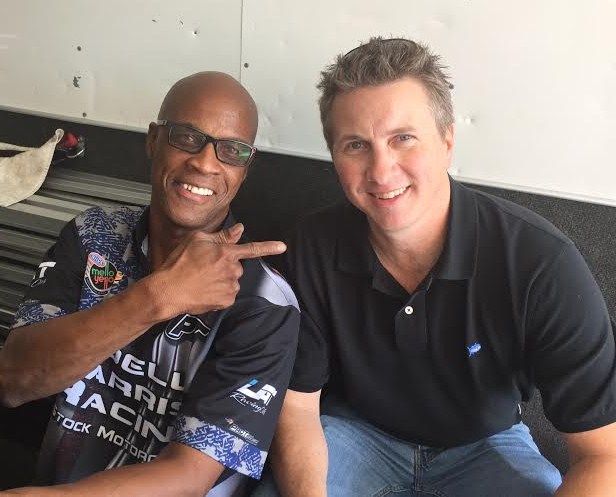 “I’ve been around fast motorcycles my whole life, but when I switched to the S&S Cycle Pro Stock V-Twin engine it took me to the next level. Nobody builds a better S&S V-Twin engine than Derek. He’s my go to guy for horsepower.“Redell Harris - NHRA Pro Stock Motorcycle Rider 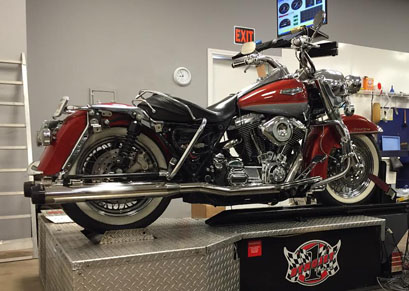 Hi Derek,
"Since it's been about a month now, I wanted to give you a report back on my 2000 Road King. You'll remember that I had a S&S VFI system installed to replace the OEM fuel injection and had a difficult time finding anyone with the knowledge and experience to properly tune my engine. While the bike was basically stock with an aftermarket exhaust and mild cams, I had just about given up and written off the VFI installation as a bad decision when I found you, and decided to give it one more try."

"In the last few weeks, I've been able to put about 1,000 miles on the bike. It's been ridden city streets around Atlanta, interstates, and a few hundred miles in the north Georgia mountains. So, I've had a chance to ride the bike in all sorts of conditions ranging from stop & go traffic, sustained highway speeds, and higher revving runs around the hills up north."

"Thus far, the engine has continued to run smoothly and freely across the rpm range. The torque it has at low RPM is far better than I had ever hoped, and the power builds smoothly as I run the rpm higher, all the way up to the redline. The engine cold starts much easier, and warm starts are no longer an issue. My gas mileage has also significantly improved from when I gave it to you."

"I couldn't ask for a better result. I appreciate the work you did for me." 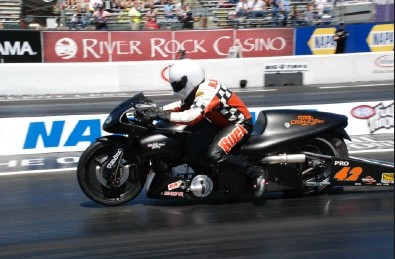 "I first met Derek when I was running the All Harley Drag Racing Series. He knows Harley’s and was very helpful when I started running NHRA with the S&S powered v-twin engine." James Surber - NHRA Pro Stock Motorcycle Rider and owner of Kosman Motorcycle Chassis Co. 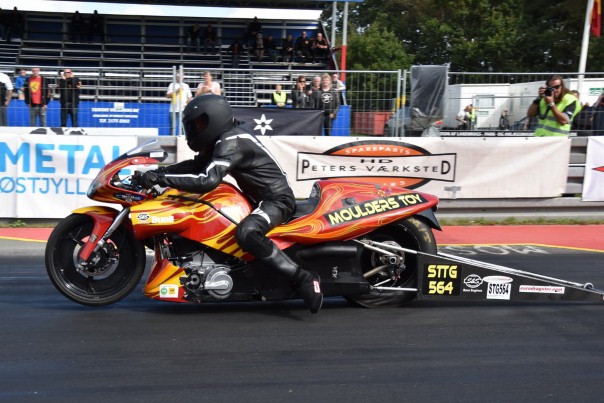 "Hi Folks
My name is Olaf Menzi and I’m living in Switzerland.
I’m riding a Pro Stock Buell in the European super twin top gas series. Last April, I visited the shop of DC V Twins and meet Derek Churchwell.
What I meet there, is a center of master engine building competence.
Even after I arrived in the later afternoon, I helped Derek to bolt on a cylinder head of a Pro Mod Suzuki, and we were wrenching till 10.30 PM. So I could see how comprehensive his engine building skills are.
It was a great experience and I could see that those guys know what they're doing. That is very helpful for the trust in your team because drag racing is also a team sport.
I’m very thankful that I meet Derek face to face and it was quite an experience. So if you’re in the need to got more power in your v-twin!"
DC V-Twin is the ultimate address !!!