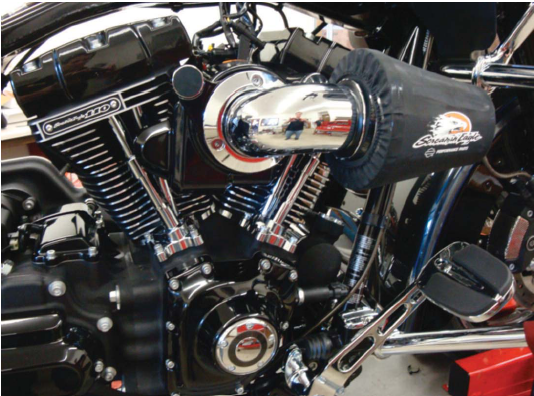 Have you ever felt like nothing was going your way? You know… no matter how hard you tried or how much you spent, you just couldn’t get the stars to line up like you wanted. Well, that’s how a lot of Harley owners felt after buying the CVO 110 model bikes.

You see, these were supposed to be the best of the best and the fastest of the fast. So what really happened? Well, from a stock engine standpoint, the 110 was the biggest of the power plants Harley offered.

They actually made about 20 more horsepower than their 96 and 103 counterparts. This is all good, right? Sure, if you like “stock, but who likes stock? We didn’t — and a lot of other Harley owners don’t either. This is why we have always wanted to do a performance upgrade to the CVO 110.

You see, most Harley owners upgrade their engines from 96 and 103 cubic inches to the popular 107. You might remember this upgrade from a couple of years ago. So what’s the big deal, you ask? They are at 107 cubic inches while the CVO is 110. Try about 40 horsepower. You see, the 107, when upgraded correctly with all the bells and whistles, is capable of managing 135 horsepower. This will leave the 110 in the dust with nowhere to turn. That is until now. Get ready to turn the luck around on any Harley 110 owner you know.

We will start with a little background information for those not familiar with the recent history of Harley-Davidson. Harley released a new engine in 1999, the Twin Cam, after a long run with the Evolution engine that you see used in a lot of custom choppers today. During the introduction period of these new engines, they also started offering a special edition bike. These bikes were dubbed CVOs, which stands for “Custom Vehicle Operations”. The CVO bikes originally came with custom paint schemes and special accessories that were not available on their standard models. Eventually they added bigger power plants to the CVOs line up as well.

While the original Twin Cams were delivered with 88 cubic inches, the CVOs would eventually come with a 95 cubic inch power plant. In an effort to keep up with custom rod shops, Harley made the larger displacement engines standard on most all Harley Twin Cam models around 2007. During 2003 and 2004 Harley offered a couple versions of the CVOs with a longer stroked engine to make 103 cubic inches. In 2007 they introduced an even bigger engine for the CVO twin cam models, the 110. Now this engine was supposed to be the cats’ meow to the lower powered earlier models. Keep in mind the stock 88’s, 96’s and 103’s typically only made 65, 67 and 69 rear wheel horsepower. While many Harley owners would consider themselves fortunate to pick up one of these, Limited Edition 110’s, luck was not on their side. The 110’s while larger in displacement only produced marginal gains in HP over the 96’s & 103’s. They quickly found themselves being out performed by their smaller cubic inch counter parts. To make matters worse, upgrades for the 110 have pretty much been nonexistent even from Harley and many custom shops. That is until now.

We were fortunate enough to have High Performance Lubricants out of Illinois step up to the plate and offer us two 2013 CVO bikes. Our instructions were to develop an upgrade package for the 110 with no holds barred. (This is right up our alley, as many of you may be familiar with the upgrade we did several years back, beefing up the 96’s to 103’s or 107’s to bring additional cash jobs into your shop.) With this request from HPL, we have finally gotten the chance to do the same for the 110. (Don’t you just love these types of customers? You know — here is my bike, make it as fast as you can and send me a bill. Well, we don’t see those very often, but thankfully we do have them sometime as it allows for everyone to grow.) OK, enough about the minor details, let’s jump right in on the 110 to 113 build.This kit is actually pretty simple to do, but there are a few custom parts that you will need to do some research on. The first challenge would be finding a piston. With the limited production runs of these bikes, no piston manufacturer offers a replacement piston. 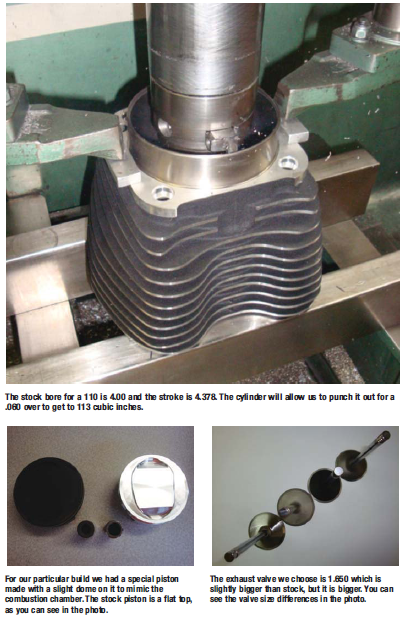 You will have to custom order ahead of time and most of the big named piston manufacturers will be able to assist you. The stock bore for a 110 is 4.00 and the stroke is 4.378. The cylinder will allow us to punch it out for a .060 over to get to 113 cubic inches. There is no need for case boring, so this maintains the integrity of the stock case.

For our particular build we had a special piston made with a slight dome on it to mimic the combustion chamber. The stock piston is a flat top as you can see in the photo above. Check with the piston manufacturer you deal with as they will be able to hook you up with the correct piston, pin and ring package. With the 110’s being offered for several years now, we might be able to get them to make it a shelf item. This Lucky 113 will take the measly powered 110 of 90 horsepower up to over 140 horsepower.

The next order of business will be to work a little magic on the cylinder head. For the most part the head is pretty easy. We start by increasing the valve sizes. For the intake we will order an intake directly from our local Harley dealer. The intake is a stock item on their 120R engine. The 120R intake valve will drop right in. That is after you cut in for the bigger 2.120 valve size. Next we will have to make our own exhaust valve from a blank as the seat diameter limits us on valve availability. You could install a larger seat and of course we would like to go bigger, but we are trying to keep the cost down while producing more than ample horsepower. The exhaust valve we choose is 1.650 which is slightly bigger than stock, but it is bigger.(See the valve size differences in the photo above.)

The next order of business will be the port work. Again, it’s business as usual here. The one thing you want to keep in mind is that there is no manifold available with an ID close to the new intake valve size. As a matter of fact, there is not even one close to the stock valve size of 2.080. The biggest manifold we can get our hands on at this moment is a special order custom and it has an ID of 1.900. As we all know, air flow is key and you will want to do everything possible to make a smooth transition here. This is considerably smaller than what we would like to have, but it will work for the build. 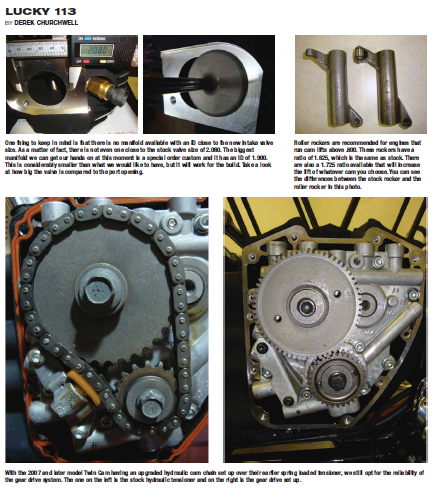 The next step for the heads is to take the deck down. The compression number of the 110 has been a big issue. We will to try and get 10.5 to 1 by milling .080 off the heads. This will get the combustion chamber down to 92cc’s.

We will then hook everything up with a 700 lift spring kit with titanium retainers and add a set of roller rockers. Roller rockers are recommended for engines that run cam lifts above .600. These rockers have a ratio of 1.625, which is the same as stock. There are also a 1.725 ratio available that will increase the lift of whatever cam you choose.

In an attempt to gain as much horsepower as possible, we will go with a .678 lift cam accompanied with a set of gear drives. With the 2007 and later model Twin Cam having an upgraded hydraulic cam chain set up over their earlier spring loaded tensioner, we still opt for the reliability of the gear drive system. (See photos on previous page.) Once again, this is recommended when going above .600 lift with the cam. 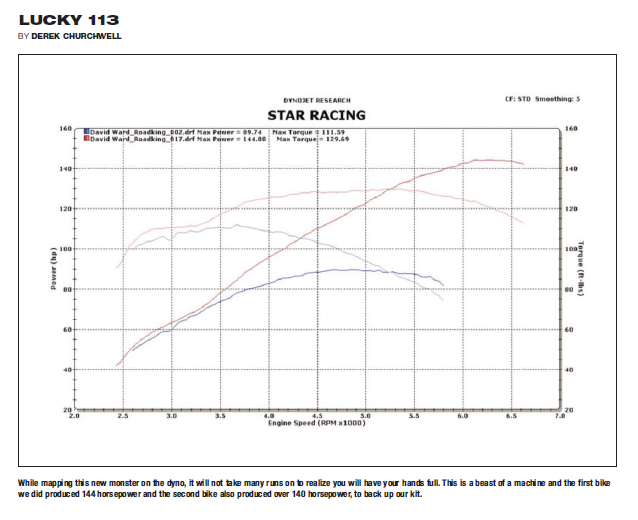 We will now connect the heads and cylinders with an MLS head gasket that is currently offered through Harley.

Externally we will use a Harley “heavy breather” and the biggest production exhaust system we can find. Our exhaust starts out with a 1-7/8 ID and steps up.

The bike will essentially remain stock appearing, but let me tell you, there is a huge difference over stock when you twist the throttle. You will notice this immediately after plugging in your tuner of choice.

While mapping this new monster on the dyno, it will not take many runs on to realize you will have your hands full. This is a beast of a machine and the first bike we did produced 144 horsepower and the second bike also produced over 140 horsepower, to back up our kit. Take a look at the dyno sheet above to see the before and after numbers. These are nothing to sneeze at. When you can offer your customer the opportunity to pick up 55 horsepower on a quick one week upgrade in the shop, your luck will definitely change for the better