Surely every engine builder at one time or another has wished they could design an engine and see it come to life. You know – here’s the rule book and a blank sheet of paper – let’s see what you come up with. Well, that’s exactly what happened to V-Twin engine manufacturer S&S Cycle in Wisconsin not too long ago.

You see, George Bryce of Star Racing came up with the idea to bring a bonified V-Twin into the NHRA Pro Stock motorcycle ring. He knew he would need a little help so he contacted long-time V-Twin enthusiast, George Smith, who is CEO of S&S Cycle, for the task at hand. These two leaders in the motorcycle drag racing world teamed up to start a new era in the NHRA.

It seemed impossible to think you could bring a V-Twin into the fray and be competitive. While nearly all of the competitors were using Suzuki based four cylinders and dominating a few lonely Kawasaki bikes, the rule book did allow for V-Twins to compete. This is where it gets a little sticky. Follow closely – Star Racing and S&S Cycle joined forces to bring a competitive V-Twin to the NHRA. Sounds good, right? Well some other guys (Vance & Hines) got wind of the idea and approached the motor company Harley Davidson® about doing a similar program. While Star and S&S struggled building a bike that would be capable of qualifying with the then current rules, V&H was busy politicking the NHRA to bring the old V-Twin section of the rule book up-to-date. Star and S&S saw the possibility of unknown changes and decided to sit on the sidelines until the rules were clarified. Finally, it looked like it was a go. Add fuel injection and allow a 60° engine combo instead of the traditional 45° V-Twin. Now back to what you wanted to read about in the first place – “The Engine!” Right?

With time being so critical in bringing this engine to the market place, there was tremendous brainstorming from both Star and S&S. Even though the boundaries were broad, the decision was made to stay with a larger Sportster based layout for the bottom end, with somewhat of a beefier redesigned case made from billet aluminum. How large you ask? How about large enough to hold a 5-1/8” bore piston complimented with a 3-7/8” stroke flywheel. Who can make a 5-1/8” piston? Just about anyone with a big enough chunk of billet, but let me tell you, you can’t just pick up the phone and order a set of piston rings. Surprisingly enough, with a piston of that size, a 3mm oil ring was sufficient and, to make it even better, a DLC coated titanium wrist pin was added in an industry standard .990 diameter. What about a sleeve for the pistons? You can’t find those on the shelf either. S&S had to make the cylinder and sleeve from one piece of ductle iron just to keep the bore round.

The flywheel was pretty easy as this is what S&S was first founded on – making stroker flywheels for Harley’s®. As we mentioned earlier, the crankshaft is a 3-7/8” stroke and rolls on a ceramic main bearing. It uses billet aluminum connecting rods, which are also made in house at S&S. So now that we have the crank, cylinder and pistons in place, we can move on to the rest of the engine.

Now let’s talk about the transmission. Up until now, this had always been a weak spot with V-Twin drag racing. So when something is not working too well, you need to find out what it is and see if you can make it fit your application. Even though the Suzuki’s had been winning with their 5-speeds, racers had started squeezing 6-speeds into the same gear box with much success. With this in mind, the decision was made to change the overall size of the Suzuki transmission and stick it in the V-Twin case. Heck, while you are there, why not throw in a Suzuki clutch as well. It’s been proven and works extremely well, although gear ratios had to be tweaked for the engine torque and RPM range, this transmission and clutch were a good fit.

Moving back up the engine to the cam chest, you will find a set of four individual cam lobes with gears. Normally you would have a gear with a shaft that you would press a lobe on, degree and weld in place. That does not work too well when you are trying to achieve one inch of lift. It has a tendency to break the weld. To rectify this problem, one-piece cam shafts were made with the lobe and gear matched for correct cam timing, which falls in the 117 range for the intake and 114 for the exhaust, with duration being around 285 on the intake and 302 on the exhaust at .053 lift. The cams are sandwiched between an inner and outer cam chest. The number two cam also carries the drive gear for the cam assembly, which is driven off the primary gear. This was a pretty complicated process, so the decision was made to drop in a set of standard performance roller cam followers. 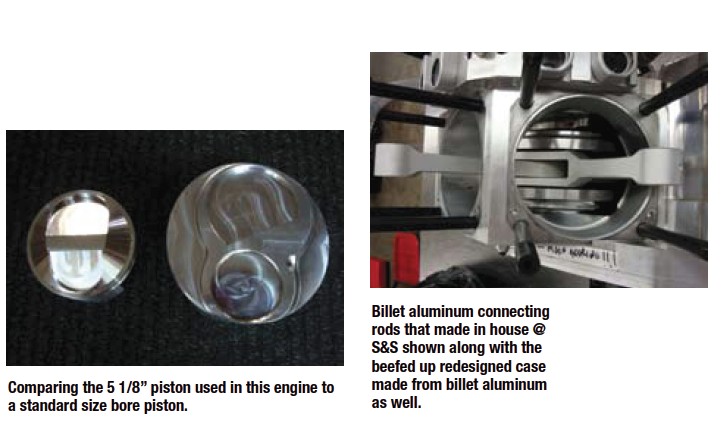 Now to cap off the bottom end combination, we add a pair of dual plug billet aluminum cylinder heads. The heads are very unique as they come with 2.700” titanium hollow stem intakes, and 2.000” titanium exhaust valves. The intake seat angle is ground to 55° at the factory for improved air flow. They are connected to the lifters via big block Chevy 2:1 rockers on the intake and 1.850 exhaust combined with a custom made to length push-rod. The ports are hand finished and flow around 5.90 on the intake and 3.65 on the exhaust at .900 lift. Valve springs are set up with a 2.500” installed height and have 425 pounds of seat pressure and 1,100 pounds of open pressure. Sitting on top of each intake track is a seven inch runner with a throttle body over three inches in diameter. This is what feeds the monster engine.

Of course, there are a few other notables to the engine like the use of a two-stage dry sump oil system which carries the life blood throughout the engine. Oil is pulled from an external tank into a junction block that sends oil directly to critical parts of the engine. The oil is then scavenged from the back of the billet oil pan and dumped back into the tank.

Plus, the engine even comes with an instruction manual and a complete parts diagram, which is unheard of in the racing world. Now having described the engine in somewhat of a “cliff note” format, let’s talk about the kind of performance you can expect to get out of this new engine design. How about 315 rear wheel horsepower and over 350 horsepower at the crank, not to mention over 220 foot pounds of torque. All while turning over 9,800 RPM down the ¼ mile at speeds well over 190 MPH with ET’s in the 6:80 range.

So what does all this mean? For one, it’s obtainable. The S&S engine is the only V-Twin engine in NHRA competition that anyone off the street can purchase. That being said, it has brought new competitors to the sport as well as converting a few Suzuki riders to the V-Twin team. As a matter of fact, seven NHRA Pro Stock motorcycle competitors have gotten their very first win with an S&S engine and two have gone on to win the NHRA championship.

Probably the biggest selling point was when a start-up team had their new engine purchase shipped from the S&S factory directly to the race track. The crew removed the styrofoam packing and quickly installed the new power plant in their bike and went on to win the race. How’s that for “S&S Proven Performance.” With results like that, it makes selling these bullets a lot easier for sure. In fact, over sixty of these engines have been sold in a little over four years and have won championships and set records on three different continents.

Oh Yeah! Those other guys – well it seems they have decided to work on getting more rules changed to try and derail the success of many new racers. This has driven some to focus on a new series, ARDL and class, Pro Extreme Motorcycle, which will utilize basically the same engine in a Pro Mod bike dubbed the new “Drag Bagger.” So if you want to go motorcycle racing, come on in – the waters fine!!! 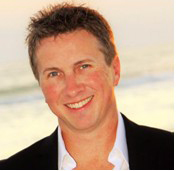