DCVTWIN offers custom cylinder head porting to maximize the overall performance of your engine. No matter what the application DCVTWIN has the correct port design for you. Whether you need a multi angle valve job to freshen things up or a complete completion racing port we have your needs covered. Our expert head porter has over 30 years of performance cylinder experience that will go into your heads. His knowledge of how to properly reshape your stock ports will increase the air flow and provide significant horsepower gains. This will help you reach your goal to have the best cylinder heads on your engine.

Going faster is just a phone call away. 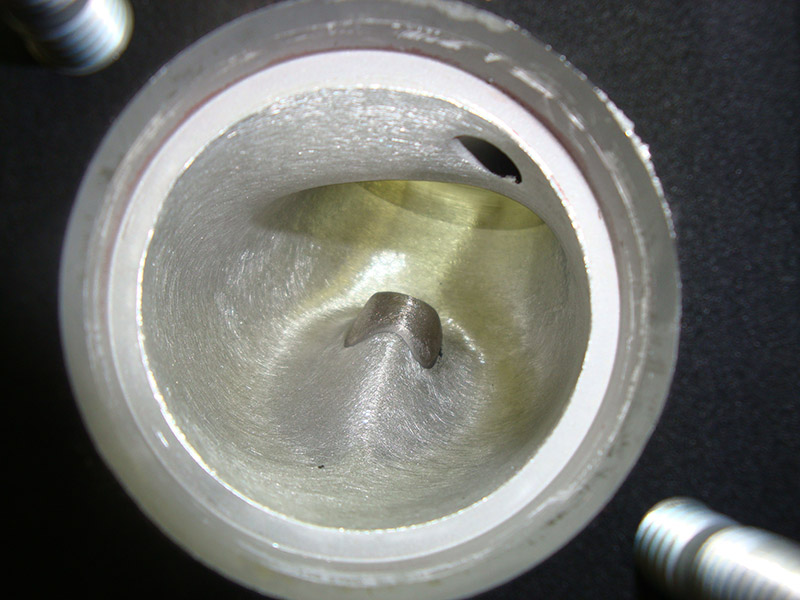 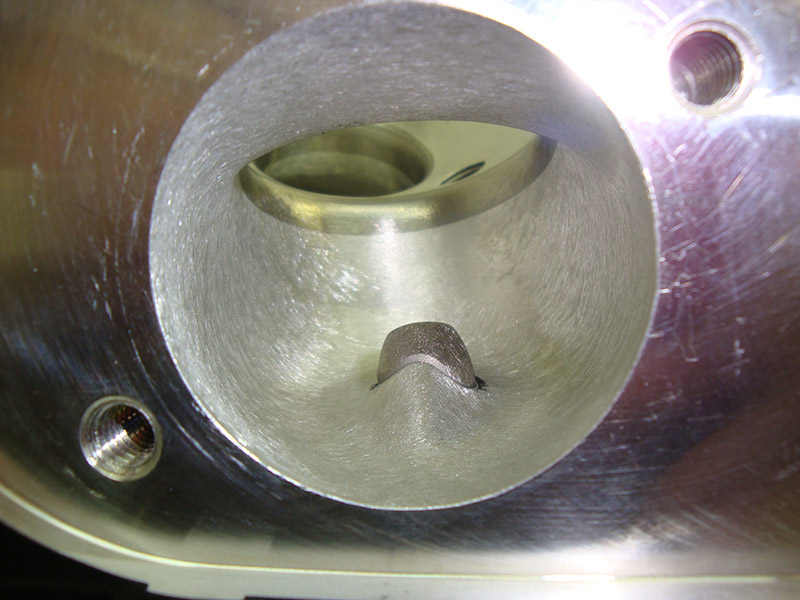 State of the art 5 axis CNC Cylinder head porting packages also available along with custom digitization. We can take your stock cylinder heads and run our custom CNC cylinder head porting program in a timely manner. This allows you to get your heads back faster to bolt on your engine with less down time. See below for details of the kit.

Already have a nice set of heads, but would like to get another set for your second bike? That's no problem. We can have your original heads digitized so you can get the same performance repeated over and over. Just call for details 478-988-4313 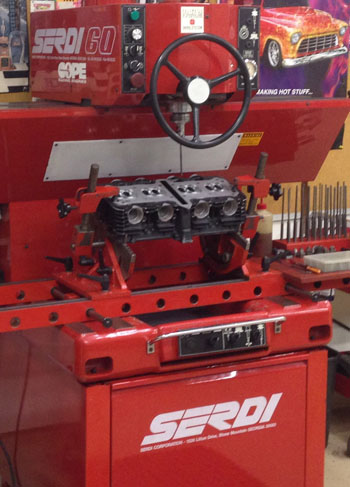 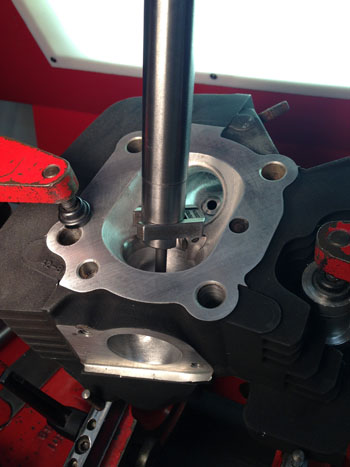 As with any good engine, someone some where is trying to make it faster. That’s what the guys at dc v-twin have done. We can take any 4 1/8th bore engine and make it faster by installing b2 heads and going one step above and beyond by custom porting the b2 head. B2 heads come with 2.200 intake valves and 1.800 exhuast valves. The valve sizes in the b2 heads are considerably larger than those in the super stock heads from s&s and especially the stock heads from harley davidson.

The b2 heads are also know as the big fin heads from the guys at s&s cycle. Not only does dc v-twin perform custom cylinder head porting on the b2 heads, they also reshape the chamber. The chamber gets bored to a different angle to allow for better blame travel and to also help in gaining that last little bit of compression.

Make no bones about it, the b2 heads will pick up about ten horsepower with a quick install or you can go the extra mile and have the heads ported and the chambers reworked for maximum horsepower at dc v-twin. This is the only way to truly get the most from your bike in a naturally aspirated format.

Next time you get your butt handed to you on the street in a red light to red light drag race match, just consider the making the move to the custom ported b2 heads from dc v-twin. Give dc v-twin a call for more information on the b2 or to place a custom order. Its as easy as a phone call away. Do it today at 478-988-4313 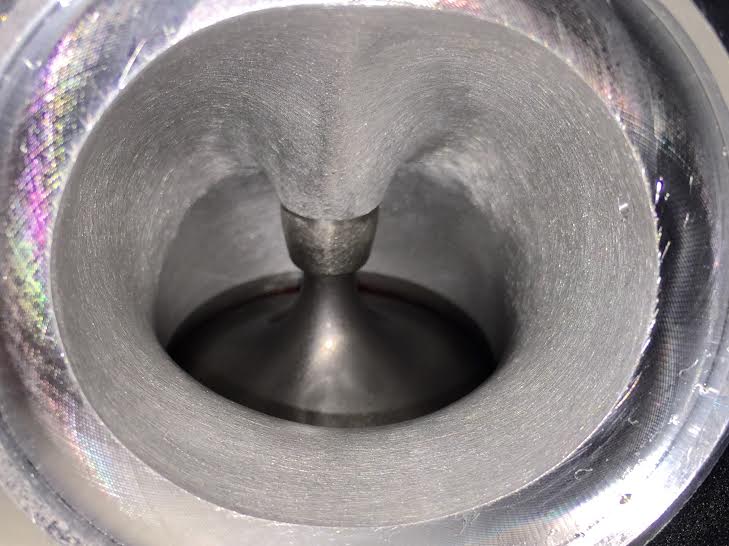 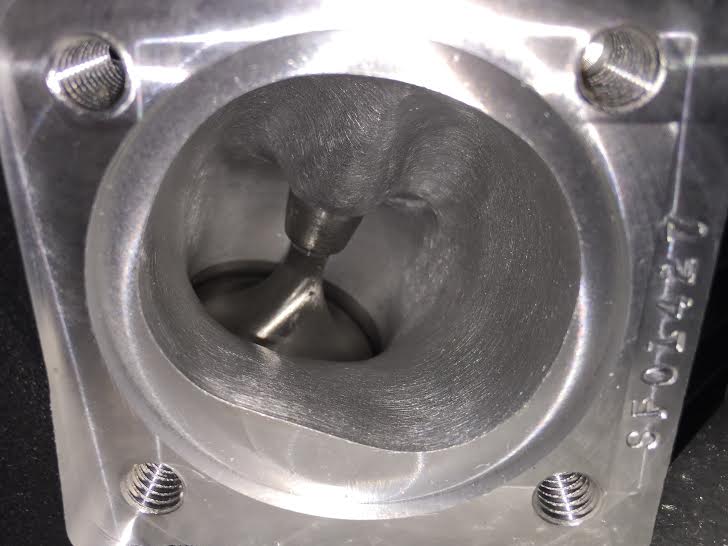 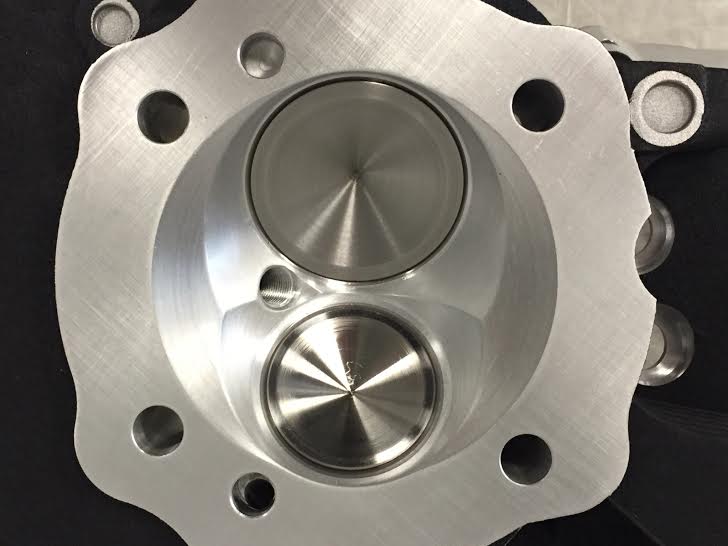 Cylinder head porting refers to the process of modifying the intake and exhaust ports of an internal combustion engine to improve the quality and quantity of the air flow. Cylinder heads, as manufactured, are usually suboptimal due to design and manufacturing constraints. Porting the heads provides the finely detailed attention required to bring the engine to the highest level of efficiency. More than any other single factor, the porting process is responsible for the high power output of modern engines.

Daily human experience with air gives the impression that air is light and nearly non-existent as we move slowly through it. However, an engine running at high speed experiences a totally different substance. In that context, air can be thought of as thick, sticky, elastic, gooey and heavy. Pumping it is a major problem for engines running at speed so head porting helps to alleviate this.

When a modification is decided upon through careful flow testing with an air flow bench, the original port wall material can be carefully reshaped by hand with die grinders or by numerically controlled milling machines. For major modifications the ports must be welded up or similarly built up to add material where none existed.

It is popularly held that enlarging the ports to the maximum possible size and applying a mirror finish is what porting is. However that is not so. Some ports may be enlarged to their maximum possible size (in keeping with the highest level of aerodynamic efficiency) but those engines are highly developed very high speed units where the actual size of the ports has become a restriction. Larger ports flow more fuel/air at higher RPM's but sacrifice torque at lower RPM's due to lower fuel/air velocity. A mirror finish of the port does not provide the increase that intuition suggests. In fact, within intake systems, the surface is usually deliberately textured to a degree of uniform roughness to encourage fuel deposited on the port walls to evaporate quickly. A rough surface on selected areas of the port may also alter flow by energizing the boundary layer, which can alter the flow path noticeably, possibly increasing flow. This is similar to what the dimples on a golf ball do. Flow bench testing shows that the difference between a mirror finished intake port and a rough textured port is typically less than 1%. The difference between a smooth to the touch port and an optically mirrored surface is not measurable by ordinary means. Exhaust ports may be smooth finished because of the dry gas flow and in the interest of minimizing exhaust by-product build-up. A 300 - 400 Grit finish followed by a light buff is generally accepted to be representative of a near optimal finish for exhaust gas ports.

The reason that polished ports are not advantageous from a flow standpoint is that at the interface between the metal wall and the air, the air speed is ZERO. This is due to the wetting action of the air and indeed all fluids. The first layer of molecules adheres to the wall and does not move significantly. The rest of the flow field must shear past, which develops a velocity profile (or gradient) across the duct. For surface roughness to impact flow appreciably, the high spots must be high enough to protrude into the faster moving air toward the center. Only a very rough surface does this.

Valve job is an operation which is performed on any four stroke cycle, internal combustion engine, the purpose of which is to resurface the mating surfaces of the poppet valves and their respective valve seats that control the intake and exhaust of the air/fuel mixture that powers the motion of the pistons after the start cycle.

In the earliest automotive engines, the valves needed to be removed and the sealing surfaces sanded, ground or lapped multiple times during the life of a typical engine. As the decades passed, however, engines ran cleaner and the addition of tetraethyllead ingasoline meant that such maintenance became less frequent. Today, valve jobs are rarely done on passenger cars for the purpose of maintenance, although they are still quite common with high-performance cars. Some reasons that may induce the need for a valve job in a modern passenger include: excessive RPM, high mileage, overheating, material failure, and foreign object damage (FOD)

A valve job is best done with grinding stones and either electric or pneumatic tools. Lapping compound and a lapping tool may be used, and is more economical for home auto repair, however lapping will only provide limited results and will not be effective on a valve or seat with anything more than very light wear or damage.

Modern engines have cylinder heads made of either iron or aluminum. Iron cylinder heads most often have integral iron valve seats. These seats are the softest and most susceptible to wear among modern engine. Aluminum cylinder heads, however, have hardened steel valve seats, as aluminum would make a very poor seat. These hardened steel seats are significantly better than the integral seats of an iron head, and can be relatively easily removed and replaced if needed. If an integral iron seat needs to be replaced, the seat must be milled to allow the insert of a new seat. The new seat is then installed with application of a high-strength metal glue/adhesive. Once installed, the seat is ground to the correct angle and width.

Valves and seats will usually have the same angle to mate properly. That angle is usually 45 degrees, but 30 degrees can be found in many modern applications. The mating angle is often accompanied by top and bottom angle cuts that are 15 degrees deflection each side of the mating angle. For a 45 degree seat, the top angle would be 30 and bottom would be 60). This method increases air-flow, which gives mild horsepower, response, and efficiency improvements.

Valves should be inspected for damage which will prevent proper operation and could lead to catastrophic failure. Cracking, pitting, channeling, and burning are typical problems leading to valve replacement. Even hair-line cracks make a valve unusable. Pitting is permissible in small amounts, but should not be present on the face, margin, or stem. Channeling is a result of uneven heating of a valve (typically from improper seating during operation), and is evident by heat discoloration in an oval shape on the bottom of the valve and often visible at the base of the valve stem. Channeling that continues will lead to a burnt valve, which leads to melting away of a portion of the valve. If an engine is subjected to excessive RPM or sudden stoppage, all valves should be inspected for straightness. If a valve is bent, it will lead to failure very quickly and often damage other parts such as pistons, cylinder walls, other valves, valve guides, and valve-train components.

Take a look at the photos below. You can see how our expert cylinder head porter reshapes the intake and exhaust ports. This reshaping is a fine art that can only be accomplished with years of experience. With over 30 years of head porting design in various forms of motorsports, our cylinder head porter can make the heads on your bike flow the most air with maximum velocity.

Included in the upgrade for the CVO 110 is a professional valve job to blend in with the cylinder head porting service. The CVO’s come with large valves front the factory, so there is no need to purchase larger valves unless you are going for our ultimate horsepower kit. Our CVO 110 extreme horsepower kit includes our new custom CVO 110 piston. The new piston will bump the 110 up to a 113 cubic inch engine. Just give DC V-TWIN a call for all your cylinder head porting needs at 478-988-4313. 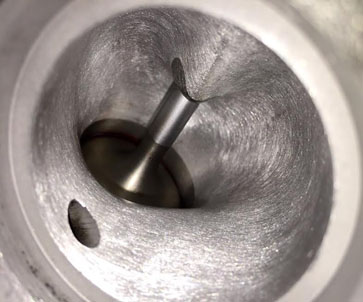 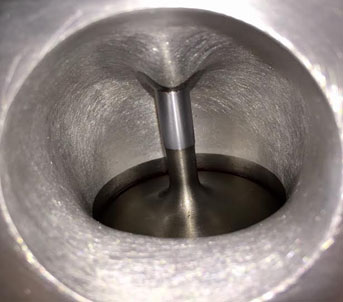 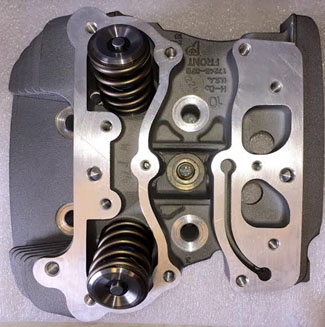 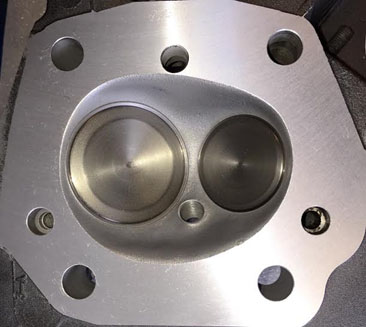 DC V-Twin is now offering custom pistons for your CVO 110 that upgrades the CVO 110 to a 113 cubic inch engine. These custom CVO 110 Pistons were designed specifically for upgrading your sluggish CVO 110. The CVO 110 typically makes almost 90 horsepower from Harley Davidson. When you upgrade with DC V-Twin’s custom pistons, your bike will make 120 to 140 plus horsepower.

Match the CVO 110 upgrade pistons with DC V-Twin’s cylinder head porting and a new cam to easily make 120 plus horsepower or you can take it to the next level with valves, cam, cylinder head porting, throttle body and of course the custom CVO 110 pistons to make over 140 horsepower. The custom CVO 110 pistons are available with a custom dome to maximize the compression that is lacking from Harley Davidson. The pistons are custom made in a 4.060 bore to gain the necessary cubic inches to take these CVO 110’s to 113’s. Your stock cylinders will hold the 4.060 so there is no need to purchase aftermarket cylinders. 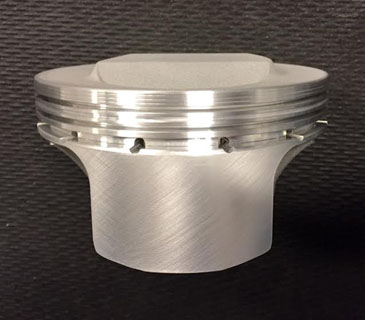 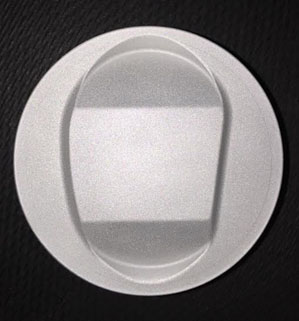 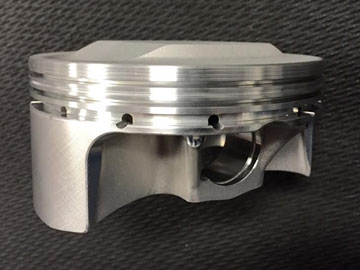